This edition released in 2011 by Fantasy Flight Games. Designed by Günter Cornett and Alvydas Jakeliunas. For 2-4 players.

Would chess be a better game if the king figure were in fact a king penguin? Perhaps the pawns should be little blue penguins. I’d probably be more ready to play if that were the case. The rook should be, well, a rook. Too many different types of penguin would get confusing, after all.

Anyway, in Hey, That’s My Fish! you play with between two and four lively-looking penguins (four for each player in a two player game, three each when there are three players, and two each with four playing) who all act a little like the queen from chess. That is, if the queen pursued some kind a scorched earth policy wherever she went. In other words, the penguins in Hey, That’s My Fish! can be moved any distance, in any straight line – but the map space the penguin moved from is removed each time. Pieces can neither jump each over other (whether the penguins in question are the same colour or not is irrelevant to this), nor the gaps which develop in the map. They also cannot occupy the same grid space as another piece. 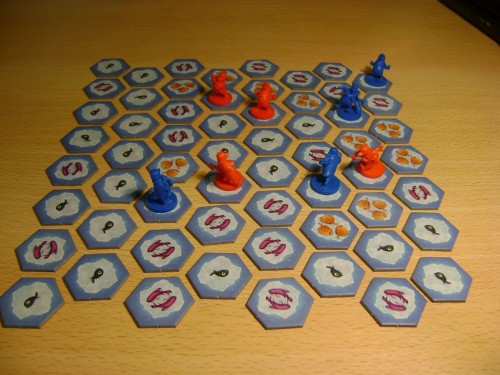 The game begins with the players deciding where to place their penguins. This is the situation after all the penguins have been placed, but before any have been moved. All must be placed on tiles showing a single fish only

The point to all this (if playing around with plastic penguins were not point enough) is that the player collects the map spaces emptied by his or her pieces when they move away. On each there will be printed either one, two or three fish. The number of fish a player collects by the end of the game is his or her number of victory points.

Here’s where someone teaching you the game might often say ‘That’s it!’ and smile at the vacant look on your face. I can understand the urge. The rules really are that short, with no exceptions and no special cases. And, of course, it’s nice to have a game where explaining the rules doesn’t feel like trying to teach the laws of calculus in Swahili (even if you happen to be a Swahili maths teacher, I guess that’s still not an easy thing to do). 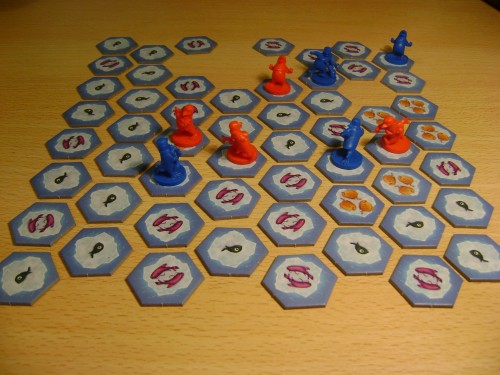 Early in the game, blue is close to sealing off a section in the top right with a number of valuable fish. How can red respond?

But that kind of cheats new players a little. My block of flats has simple evacuation rules in case of a fire, but it doesn’t make a fire drill much fun. As with any game, new players need to be told more than just the rules to get where the joy in Hey, That’s My Fish! is. And, in my view, the pleasure in this game stems from the changing map and the realization that the removal of a single piece can dramatically strengthen or weaken your position. Particularly when you’ve seen what your opponent should do to screw you, and you’re praying that she doesn’t do it.

In each game, it’s soon the case that developing gaps will mean that most penguins cannot move very far each turn. This limitation can be good or bad. Before long, there will be sections of the map that only one penguin can reach. This can either mean having a private feast worth a tonne of points, or becoming trapped with perhaps only a fish or two to show for it. 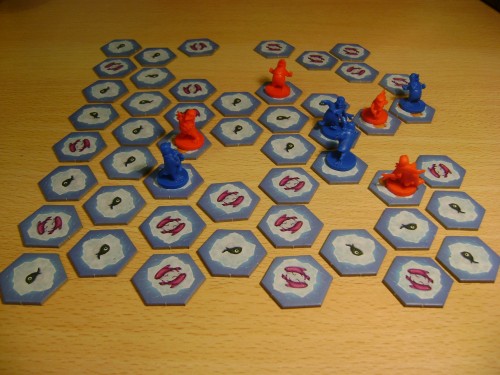 Not very successfully, as it happens. Things go from bad to worse for red. A penguin in the second column from the right is all but trapped

And, often, it’s only single unexpected move that’s the difference between one or the other. Perhaps a neat side-step – moving onto a tile with a single fish, when one with two seemed more obviously attractive. If this puts you into a position which attacks two of your opponents pieces, then it might well be worth it. There’s a lot of room in this game for forks, for knifing your opponent. Indeed, a whole world of cutlery-related attacking possibilities. 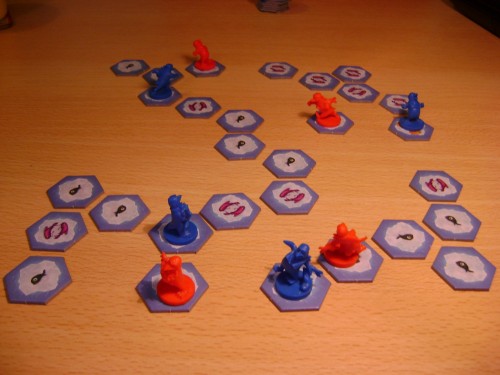 And quickly the game is complete. All tiles are definitely controlled by one player or the other. Blue wins on this occasion (though I don't recall the exact margin of victory)

For me, the combat is at its most beautifully tense with two. With three or four, making plans becomes somewhat tougher, as each player has fewer moves (and indeed, fewer pieces with which to attempt to corner any given section of the map). On the other hand the game talk an extra player or two introduces – at least, with the right playing partners – can add a new source of enjoyment (I mean, the attempts to convince everyone that no, you’re not winning, and no, you’re not about to claim that massive ice-flow in the corner).

However many people are playing, the game shouldn’t take more than fifteen minutes or so. It’s a good length for this deceptively strategic game. It can be a mental strain to play – albeit a pleasurable one – so it’s relieving not to be overworked. Even if picking Hey, That’s My Fish! up for quick game does often lead to another, and another.

One thought on “Be Gentoo with Me: A Review of Hey, That’s My Fish!”