Released in 2011 by Goldmerk Games. Designed by Meelis Loover. For 2-4 players.

In the first two games I played of Who Eats Whom? – a food-chain themed card game – I ended up using the game’s single gun-wielding human hunter to catch (and eat) a hedgehog and a spider respectively. It does raise the question of how lucky one would have to be to shoot a spider successfully (and how much spider would be left to eat afterwards, of course). But it was fun that Who Eats Whom? let me do such daft things. I won the first of those games, and lost the second. Make of that what you will.

However, things could have been even more ridiculous. At least my hunter wasn’t shooting at leaves and berries, as he could have.

A question might arise regarding why he should hunt such trifling plants and animals, when there are also wolves and bears around? That’s because the point structure in Who Eats Whom? provides the greatest rewards for eating the smallest creatures. Spiders and berries are worth eight points each if eaten, while a wolf or bear are worth nothing. It’s a little strange, but it’s the only major leap of logic the game asks of its players.

A bear and a snail compete to eat some berries. Not exactly an even match

Eating, though, is seldom easy in Who Eats Whom? To feed in this game is a two stage process. First, a player must hunt by playing a card from his or her hand, representing an animal of some kind, over a card in the central tableau which it can eat (a pawn in the player’s colour is also placed on the hunter, to denote control over it). For instance, a frog can hunt spiders and snails. Then, on a future turn, that player can eat the animal – removing both cards from play, stashing away the hunted for its victory points – provided, that is, an animal of equal or higher rank in the food-chain isn’t hunting the same prey, and provided the animal in question isn’t itself being hunted. Frogs are, you may not be surprised to hear, not to every animal’s taste, but hedgehogs and wild boar are keen on them.

Situations in which a hunter becomes the hunted arise frequently: the interval between hunting and eating means that when a player is close to a valuable meal, others have a chance to stop him or her. Moreover, preventing a player’s animal from eating by either method not only stops him or her from claiming points, but also ties up a pawn, of which each player possesses only four in total. 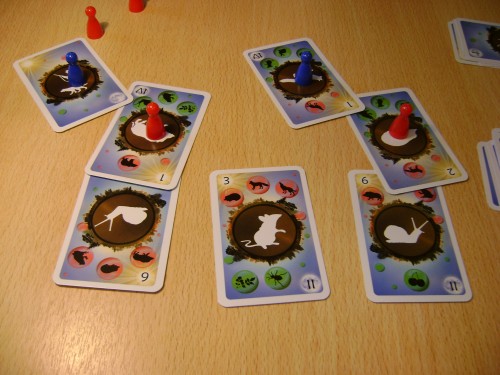 Two of red's pawns pinned, and potentially to be eaten. All over two measly snails

What is more, if an animal I control is hunted by another, it can then be eaten (again, supposing this predator is not itself hunted or challenged by an equal or stronger rival). When this happens, not only does my opponent claim what had been my card for victory points, he or she also takes the pawn that was on the card.

It is possible for two players to exchange pawns with one another at any time, if they so wish, but keeping another player’s pawns until the end of the game is valuable. For each of another player’s pawns that I hold at the end of a game, I can take one card at random from those the player has won during the game. Lucky drawing, pulling high point cards like spiders and berries, can easily win a player the game.

Thus, whether playing with two, three or four, a player has to be careful in managing his or her pawns. If, say, an opponent is hunting a spider with a frog, I might dream of catching the spider myself with a bear, but if I don’t have one I could still match the frog played with a frog of my own (or a mouse, which is considered to be of the same rank). It prevents my opponent from picking up the eight points for the spider (at least for now), but a pawn of mine is put at risk through sitting on an animal that’s low in the food-chain.

Sometime during the course of a game, you will have to trust to luck – there isn’t an endless supply of bears and wolves for you to draw. However, a good memory, and an acquaintance with the food-chains in the game will count for a good deal. There are four of almost every card in the deck, so having an idea of whether the most powerful animals are still in the game or not is key to knowing how risky a given move is.

Who Eats Whom? does provide a few hand-management options, in addition to hunting and eating. A card from a player’s hand can be exchanged for one in the tableau, provided that card is not part of an active food-chain – which mechanically is important, since a food-chain starting from, say, a bear isn’t going to become very long. It allows players to plan mini-combos, taking a bear or wolf, say, and replacing it with some of its favourite food. On top of this, a player can also discard a single card, and replace it with a face-down card from the top of the deck.

Decisions for blue. The frog could hunt the spider, which might mean big points, but the bear is one of the most powerful cards in the game. Perhaps taking that would be better?

Four cards twist things slightly. One is the lethal and often ridiculous gun-toting human, who may hunt any food in the forest (and I mean, any  – this man has no shame, or, indeed, sanity). There are also three swarms of flies, which are used to annoy the top card in a food-chain into giving up the hunt (removing it from the game). This is the only way the human can be stopped. Together these cards are  just enough to allow the highest animals to feel powerful, but not invincible (which would get dull).

A game takes about fifteen minutes. The memory aspects of Who Eats Whom? make it a tougher, more tiring game to play than first impressions might suggest. However, I am pleased to report that even when working hard to remember which cards have been played, it is nonetheless seldom that any move is automatically the best in a given situation – there’s always a mental tussle between trying to sneak a quick meal now, or preparing for greater things later. Of course, there’s also a breezier, lighter game in here if played with younger players, or others ready not work their memories too hard. I’d happily recommend this game in either case.

One thought on “Man Eating Spider: A Review of Who Eats Whom?”