There’s a chimpanzee in my barn. I want my neighbour to buy it from me; sadly there’s no room for it in any of the enclosures at my zoo, and I could do with the money I’d make from the sale to move a refreshment stall to a more useful location. For my neighbour, I’d say the chimpanzee looks like the difference between filling an enclosure – securing a load of points – and not.

It seems, though, that my neighbour is hoping to pull a fresh chimpanzee tile from the bag, rather than buy mine. My chimpanzee has been in my barn a couple of rounds, and so far she’s shown no interest in it. However, it’s now late in the game. Looking around the table, nine of eleven chimpanzee tiles are already in play. Some tiles – in the region of twelve or so – will not be used this game (the game ends in the round in which players start to draw from the last fifteen tiles, which are set aside before the game). With every draw that isn’t a chimpanzee, the chance increases that the awaited chimpanzee tiles will not be available.

How to nudge my neighbour into helping us both? It’d be considered bad form to solicit a sale openly (at least by the tacit etiquette of this group). Instead, when it comes to my turn I toy – just a little – with the chimpanzee tile I’m hoping to sell, pushing it once up and once down my barn; feigning that I’m only occupying my hands while I struggle a little with my choice of move.

Really, I knew already that I’ll be taking a truck with an elephant on board. It is, after all, a fertile female; I have a fertile male – and, in this game, there’s no need to wait 22 months for the result of a pairing like that.

After what I reckon to be enough time for my (probably not really) subtle coercion to register, I take the elephant. She and her mate do the thing and provide me with an infant. Not bad. 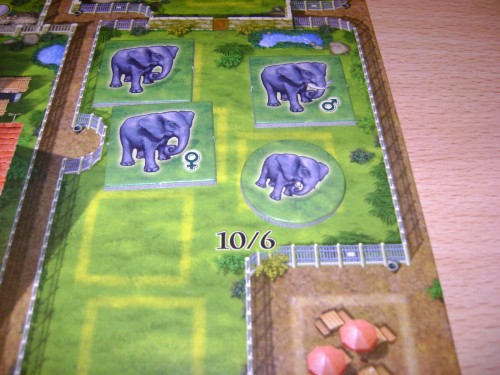 Elephants: male, female and offspring (plus one other - most adult animals are infertile in this game, strangely)

Then I look at my neighbour. Her eyes are actually on my barn. Unbelievably, it’s on. The chimp gets a good home. I get a bit of money to sort out a better location for my refreshment stall.

Would it have been a disaster if I finished the game with the chimpanzee still in my barn? Not entirely: there’s a two point penalty for each type of animal still in the barn at the end of the game. Typical winning scores depend on the number of players, but two points is a deficit which can be overcome to win whatever number are involved.

Not being able to move the stall is a problem on a similar level: at the end of the game, an enclosure with two or more empty spaces will only attract victory points if it has a stall adjacent to it.

Put these two elements together, though, and the sale means my bacon has been saved. In the end, I come second out of four. I might have come last were it not for the sale.

Much of Zooloretto – a quick, family friendly game of zoo-management – consists of similar, deceptively nuanced interaction. And for that I think it offers a tremendous playing experience. The game wholly deserved the Spiel des Jahres award it won in 2007, as it represents a fantastic example of what an accessible modern board game can achieve (and all in 45 minutes). While providing each individual player a meaningful decision practically every turn, the value of Zooloretto as a play-experience is, in large part social – playing it is (in a way which is not always true of other modern board games) playing together.

This is because practically every decision in Zooloretto must, almost unavoidably, be made by assessing an item’s value to both yourself and other players.

On most turns a player will either draw a tile (which will show either an animal, a refreshment stall, or a coin) and add it to a truck, or the player will take a truck with at least one tile already on it. Thus, if you draw an animal you wants it will be a whole round before you have the chance to take it. The chance of an opponent taking a desired tile can be minimized, however, with some thought. Placing say, a panda tile on a truck with another panda will make that truck easy for anyone collecting pandas to take. Put a panda with a zebra – and it might well be that you’re the only one collecting both. 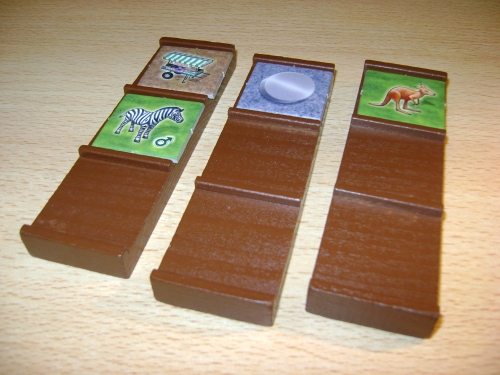 Likewise, if you pull a tile you personally do not need, it pays to be attentive to its value to your opponents. If you grab the chimpanzee your neighbour has been craving, you can’t stop her taking it, but you can make gaining it bittersweet. For example, you might stick it with a kangaroo she has no space for.

More seldom, players may take a third and final form of action – paying money to develop their zoo in some respect (these actions are rare because money is hard to come by in Zooloretto). A new enclosure can be bought, while animals and stalls can be rearranged, a new animal bought from an opponent’s barn, or an unwanted animal can be removed from the game (sent to the great zoo in the sky, the glue factory, or packed off to the circus – it isn’t specified). Each has value in itself, of course, but money actions can also be used as a de facto means of passing when either pulling a tile or taking a truck would be troublesome. Thus, even those money actions which only concern the active player directly are made in relation to the trucks on offer.

The zoo is developing nicely. Though the zebra at the top right might be getting a bit lonely

The luck of the tile draw does play a part in Zooloretto – if you’re craving a zebra, sod’s law determines they’re all stubbornly staying in the bag. But, as with Carcassonne, this seldom leaves a player feeling impotent – the choice of which truck a tile is placed on is meaningful (except, of course, when there’s only one truck left).

Unlike Carcassonne, however, players can enjoy a sense of ownership over what the tiles create; even an unsuccessful player should have a decent collection of animals by the end of the game. Which is not to say Zooloretto only suits the terminally uncompetitive. Winning is meaningful: the winner will have done so through good play – but it isn’t a brutal game to lose. And, in part because of that, it’s a game I’d happily suggest playing with almost anyone, whether familiar with other modern board games or not.

Zooloretto was released in 2007 by Abacusspiele, was designed by Michael Schacht and is for 2-5 players.