Crazy Lab, designed by Jordi Gené and Gregorio Morales, and released last month, is a curiously tricksy trick-taking number. A spin on the Sticheln formula, whereby each player is trying to avoid winning cards of a certain suit, Crazy Lab is lighter than its predecessor, but nevertheless conceals some strategy. The multi-suited cards used by Crazy Lab (showing flasks with liquids of multiple colours) are a neat novelty, but can often make it difficult to read the best choice in a given situation.

Partly, Crazy Lab is light insomuch as it limits its players’ choices. Unlike in Sticheln, in Crazy Lab a player’s pain colour is determined before the game begins. Each player’s first action, before looking at any of his or her cards, is to select one of the game’s five colours to avoid. Each player’s choice must be different. It might be that I choose to avoid yellow (that being an unpleasant colour, after all), and then find I have a hand full of yellow. Que sera sera. So be it. Пусть будет так.

Crazy Lab also restricts choice in the sense that trump for each trick is beyond the control of players: before every trick is contested a card is revealed from a deck dedicated to dictating trump colour. This causes much play to be reactive: attempting to control the game is not a realistic goal in Crazy Lab. If I win a trick, and thereby become starting player for the next trick, it’s very difficult to know whether that might help or hinder me, in that I don’t know what colour will next be trump. Grabbing a trick that brings a good haul of points is thus a calculated risk: I might face a situation in which I cannot avoid receiving a large number of negative points from the next trick.

It should, however, be said that the trump colour deck is at least partly player composed. In addition to his or her regular cards, each player has four cards (in all the colours other than his or her pain colour): each player contributes two of these to the trump deck. It’s difficult to attend to the flow of this deck, but, in each game a player at least knows two colours that will be trump, albeit not when those times will be.

In addition, Crazy Lab is light in that limits its the ability of players to analyse their positions relative to one another as the game unfolds. There are 95 regular cards in its deck, ten of which will be dealt to each player: thus, even with five players, just over half of the game’s cards will be in play. This means card counting is largely meaningless: attempts to deduce whether a given opponents has a strong or weak hand are likely be futile, given the limited information available. But then, a trick-taking game consisting of only ten tricks can probably be expected to be pretty light (multiple rounds could be played, though this is offered as a variant in the rules, rather than as a standard way to play).

Moreover, Crazy Lab asks each player to choose a colour in which to gain points (unlike in Sticheln, in which any card not in a player’s pain suit counts positively towards his or her score), but keeps this information secret. This colour cannot be one of the two which the player has offered for the trump deck. It might be deducible – if a player makes a serious attempt to win a particular trick, there’s probably a reason why – but it is not necessarily the case that the colour each player desires will be clear by the end of the game. This again serves to give Crazy Lab a very insubstantial outward impression.

Indeed, a new player starting his or her first game of Crazy Lab might well be confused by the absence of information available to give direction. Choosing which colour to collect can be tough; figuring out how to go about collecting it without exposing oneself can be even tougher.

This morning, as an experiment, I tried out a couple of three player games, in which one of the three players, Random Stephen, simply played the first card from his hand each turn, and also chose his positive colour, and contributions to the trump pile at random. Here’s what Stephen was confronted by at the start of the game: 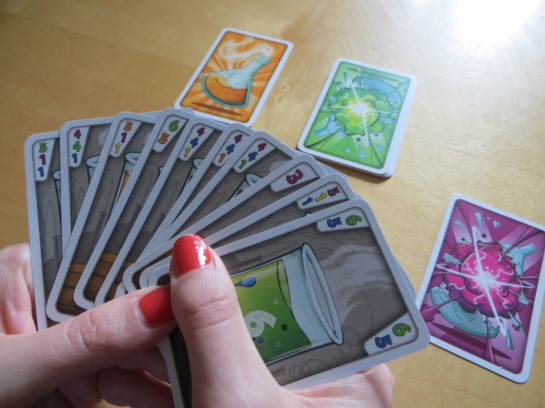 Random Stephen (played by a model) considers his hand of cards prior to the game. There’s quite a lot of purple, his pain colour, in his hand. However the two cards with a green six are strong, insomuch as six is the highest number in the game. Stephen could be pleased with his lot

Stephen, playing normally, might be quite excited by the powerful green cards in his hand. He could select green to be the colour in which he gains points (unlike in Sticheln, for those familiar with it, the number shown on a positive card is important in calculating score: if Stephen picked green, and won one of those green cards, it would be worth six points). He could, however, add green to the trump deck, perhaps picking blue or orange as the colour in which to gain points. Whenever green would be revealed as trump in that case, Stephen would be highly likely to win the trick, and could still give himself a good number of positive blue or orange points in doing so.

In actuality, it turns out Random Stephen nominated yellow his positive colour, twit that he is.

Here’s a trick, mid-game. Stephen’s card, played first, is the left-most in the picture:

Questionable play from Random Stephen: leading with a purple five when the trump was purple was not likely to end well (given Stephen is trying to avoid purple)

I suppose these examples are silly. In the end, the two real players scored plus 9 and plus 10, Stephen plus 2. In a second game, the scores were plus 31 and plus 19 to the two humans, plus 7 to the lamentable Stephen.

In each game, it was only really in one or two tricks that Stephen showed himself to exist only as a fabricated personality given to a dumb experiment – most dramatically in the incident above, which netted Stephen minus 6 points, all told. In that Stephen himself did not know what colour he was collecting, he masked his aims well.

And therein lies the rub. A game of Crazy Lab appears to be about one or two key tricks, though which tricks are key will be different for different players. There might be one or two times in a game when the colour you’re trying to collect is the current trump colour. This is where Crazy Lab presents a challenge – to make the most of such tricks, while, if possible, hiding that the trick in question was one you actually wanted to win. There might be a bit of managing one’s talk, attempting a bit of misdirection – but too much might draw suspicion. It’s possible, of course, to win points when one’s desired colour isn’t trump, but this is more likely to be the product of opportunism, rather than skilful play.

The rest of Crazy Lab feels like a muddle: trying to offload cards that are either detrimental to your plans, or, more often, irrelevant to them, hoping they won’t reach someone who actually wants them. For a new player, this muddle might, broadly, be bewildering: it’s often not really analysable which card is best discarded – in contrast, I guess, with most trick-taking games. Naturally enough, such decisions will cause some players to stutter: it might feel, to some, as if there should be an objectively best choice, and the best course of action should be analysable, when, frequently, this is not the case.

For me, though, Crazy Lab is, broadly speaking, an enjoyable muddle. A good amount of the time, you can revel in slapping down pain cards on other players, secure in the knowledge that there’s no way you could or should be trying to win a given trick. You can enjoy being out of control in Crazy Lab in a way you cannot with other trick-taking games, because here there’s no realistic means to ever establish control.

Time, as it does with ostensibly simple games, might reveal a few more nuances to strategy, but Crazy Lab will doubtless remain a game in which a lucky player will often outdo a capable one. However, Crazy Lab possesses many qualities which are desirable in a ten minute game: it’s simple to teach and play, and somewhat silly, but not at all banal.