Starship Merchants is a game of timing. It uses a board which is, effectively, a large rondel of four spaces: you buy and equip a fleet of starships across the first two spaces, collect goods on the third, and sell them on the fourth. if you cannot take an action on the space you currently occupy, you must move to the next (you may also move on electively). From this simple core result some teasing situations.

This turn I have to move to the market, where upgrades to ships are sold, and pilots hired. I am unable to take an action at the shipyard, which I currently occupy: I already have the maximum number of ships, and as a result I cannot buy another. However, as I enter the market there’s a decision to be made. I can, optionally, discard one of the two cards on sale there at this point and draw the top card of the deck to replace it.

Currently, there are no extra cargo holds on offer, and I really want one of those. If I flip a new card with just this in mind, that would be hope guiding me rather than expectation: the deck contains too many cards to have any confidence in seeing a card of a particular kind. Some cards, naturally enough, would be much better for my opponents than for me. The pilot who rewards delivering cobalt, for instance, would favour the blue player, who has specialized in that resource, and who will also have to enter the market next turn.

Ultimately, I decide to expose a new card: probably in large part for the reason that it’s more fun to do so than not. I discard a survey robot and flip a replacement; grapples – effectively an extra hold, but costly to fill. I choose not to purchase this equipment, but nonetheless I find myself exhaling in relief. After all, curiosity did not, on this occasion, prove my undoing. 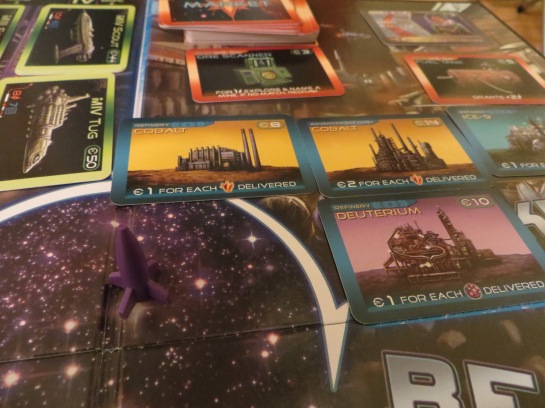 Purple in the market

Teasing tricks of timing define Starship Merchants – a pick-up-and-deliver game themed around asteroid mining, designed by Tom Lehmann and Joe Huber. Luck is part of of this tease in certain cases: on occasion, a player might find himself or herself powerless to avoid leaving a plum card for an opponent who happens to be there to take advantage. The whim of the game can mean a run of gifts for a given player. More central to the outcome of a given game of Starship Merchants, however, are the tricks of timing of which it avails players.

The structure of Starship Merchants is such that players must themselves actively focus upon their own timing (and keep an eye on the timing of other players). A player circles between the stages of a business cycle in a fixed order – buying ships, equipping them, collecting goods with them, and finally dropping off those goods for payment. Even if a player does not wish to carry out one of these processes on a given turn, he or she must pass through the sector in question, and spend a turn doing so. However, a player does not have to stay in the same rhythm as others: while any given sector cannot be skipped, it is possible to remain in a sector for more than one turn (as long as the player can take a legal action there). Thus, it’s possible to stay in the marketplace buying equipment for multiple turns, or to buy more than one ship at the shipyard on successive turns. Through doing so, a player can establish his or her personal pace – and spring surprises on opponents.

The most substantial traps in Starship Merchants are those that a player operates to squeeze his or her fellows, rather than those the game generates by itself. The question of when to buy a new ship is considerably more important than the question of whether to buy equipment because it can have a direct effect upon other players. In particular, when a player purchases the first ship of an advanced generation it will leave an older generation obsolete – and therefore unable to operate. While the rules of the game dictate when obsolescence occurs (the first generation of ships always becomes obsolete when the first ship from the third generation is bought; the second generation becomes obsolete when the first ship from the fourth generation is bought), only the purchases of other players drive this process: nothing in the game itself directly advances it. As such, getting to the shipyard almost always provokes considerable rumination: working out, say, whether a given ship might be profitable if it is only run once before obsolescence, and second guessing, who, if anybody, might buy the ship if I don’t (and what the consequences of that might be). Even if a purchase I make does not directly trigger obsolescence of a generation, it does bring that event closer.

Fans of the 18xx family will recognise that the mechanism of obsolescence derives from those games. However, Starship Merchants poses novel questions with respect to the device. Because it does not mandate all players perform a phase simultaneously (not all players will occupy the shipyard at once, or the asteroid belt at once), the timing questions around obsolescence are distinct from those in 18xx games (at least those of which I have knowledge).

Further, players can exert control over the timing of the game’s end. A player with sufficient funds when he or she ends a round is able to make the discretionary declaration that this round will be the last for all players (if a player has more than 100 credits he or she may declare the round the last; if a player has more than 150, he or she must do so). A player might, therefore, scupper the plans of his or her rivals by bringing a given game to an unexpectedly early end – denying a ship an expected second chance to operate. Pleasingly, it is equally the case that letting the game continue might also be the best means to thwart rivals.

Questions concerning the buying of ships and the end of the game naturally interact. A player might refrain from buying a ship which he or she could afford if it looks likely the present round will be the game’s last. Though all players will have chance to pass through the asteroid belt and earn money once the game’s end is declared (each player can work back to the dock in as many turns as desired), a ship is unlikely in a single run to earn enough to recoup the investment made in it.

Those moments in which playing Starship Merchants feels the most stimulating are those in which one jerks against the flow of play at short term expense, hoping either to wrest control of an aspect of the game’s timing, or to be better positioned to weather the flow. When a player is in the asteroid belt, for instance, each ship must be run on a separate turn. A player might, very seldom, forego the chance to run a ship in order to reach the dock more quickly. There could be a variety of reasons. Reaching the dock before a player who intends to end the game means being able to pass again through the shipyard, market and asteroid belt, implying, potentially, significant extra earnings. Reaching the dock more quickly also means reaching the shipyard more quickly – perhaps making it possible to drive a rival’s ships into obsolescence at an especially inconvenient moment. Defying expectations can be valuable in a game in which a great deal rests upon reading the plans of others.

Other questions Starship Merchants poses relate to the balance between long-term planning and opportunism. Three resources exist in the game to be mined and sold: cobalt, deuterium and ice-9. A player can set himself or herself up to extract benefit from focusing on a particular one of these – perhaps by recruiting a pilot who gives bonus credits for selling one of those goods. This focus may very well be tested, however. While goods tokens brought into the game do not ever leave it, those a player has in front of himself or herself, waiting to be mined, might – for a price – be stolen by another player. If I’ve amassed a large quantity of ice-9, say, and have many inducements to continue to focus upon it, other players might start to see value in taking tokens from in front of me. Indeed, other players might gain incentives of their own to mine ice-9. Though a permanent claim can be put upon a particular token (again, for a price), this can only happen once per round. Thus, any specialisation is ever vulnerable. 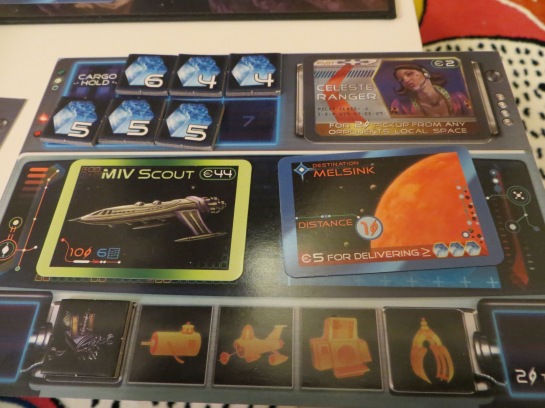 Timing is again, however, important in this aspect of the game. Resources currently loaded onto a ship cannot be stolen – and, as such, reaching the asteroid belt at the right time is significant. If I’m eyeing up resources in front of another player, beating him or her to the belt might not be a bad plan.

However, while Starship Merchants has much to offer (and as it’s playable in 2ish hours it’s not too dense for an evening), it is tough to recommend without certain caveats concerning its production. Though its 50s tinged sci-fi artwork is charming – albeit not top level – other aspects of its production let it down. Information is misprinted on certain equipment tokens and cards (and, in one case an equipment card and the token contradict one another). The files section of the game’s page on Board Game Geek does have FAQs, card clarifications and errata, but this mitigates, rather than removes, the impression of a sub-standard production. At a game session, it’s tough to get new players to trust in an unfamiliar game from an unfamiliar company; if they do agree to play Starship Merchants, the frequent need to warn about printing errors can reconfirm what should be unfounded scepticism.

A less significant problem, which again could easily have been avoided, is that money tokens of different values are very similar in colour. It makes collecting payment, which should be a quick job, a bit of a chore. It also makes it rather difficult to read the financial situation of other players, necessitating repeated enquiry as to how much respective players possess.

Given the number of great board games in existence, there’s little need to invest oneself in anything which is less than stellar, in production as well as design. Starship Merchants is a first rate game with second rate production. The extrapolation of a certain charitable instinct, nurtured in many of us from childhood, might compel us to try and love an essentially strong game like this in spite of its surface flaws. I won’t say that instinct is entirely a faulty one. Find forgiving playing partners, be forgiving yourself, and there’s a tense and instructive experience to be had here. If, however, you are inclined to that suspect you, or those you play with, would be distracted by this game’s frustrating production, I wouldn’t blame you for avoiding it: enough games exist which don’t have barriers in front of their better qualities.

One thought on “A Question of Time: A Review of Starship Merchants”