The acclaim for Uwe Rosenberg’s recently released Caverna: The Cave Farmers interests me. It’s a very conservative design, from an increasingly conservative designer. It offers very little innovation, but the cult of the new have fallen hard for it (with Tom Vasel vocally proclaiming that it has displaced Rosenberg’s 2008 megahit Agricola in his collection).

The relationship with Agricola is a deep one, so it is understandable that Vasel should talk about Caverna as a replacement for that game. When word of Caverna first emerged, back in 2010, it was known as Agricola: The Cave Farmers, and the moniker Agricola 2.0 has stuck to the game since.

Caverna adds mining for ore and rubies to the farmyard management of Agricola in a way which is thematically peculiar, but mechanically unspectacular: ore and rubies can each be collected through ordinary worker placement (i.e. place the worker, take the item), much like any resource could in Agricola (be that resource a building material, a crop, or livestock). Building mines can mean collecting more ore or rubies from the action spaces in question, but, ultimately, little distinguishes either from, say, stone, or other resources which had existed in Agricola.

The bigger change Caverna makes is in swelling elements which already existed in Agricola, and bundling multiple actions on a single space to create abundance. A clear example of this is that fencing a space, collecting animals and building a stable would take three separate actions in Agricola, but can all be achieved through one space in Caverna. Everything else in Caverna is scaled up accordingly. Where each player board in Agricola has 15 spaces, each board in Caverna has 24. Filling the extra space is no harder than filling up one’s smaller farm in Agricola, however, given how much more each Caverna worker can accomplish. Harvests – during which family members must be fed – come more rapidly in Caverna than Agricola. Again, however, feeding in Caverna is no more challenging than it is in Agricola (indeed, it’s commonly felt to be easier). Caverna has five kinds of animal to the three in Agricola. In effect, Caverna can be said to come from the school of thought which sees Monopoly: The Mega Edition  or MEGAcquire as useful items. Everything is bigger (even the box) for the sake of being bigger. 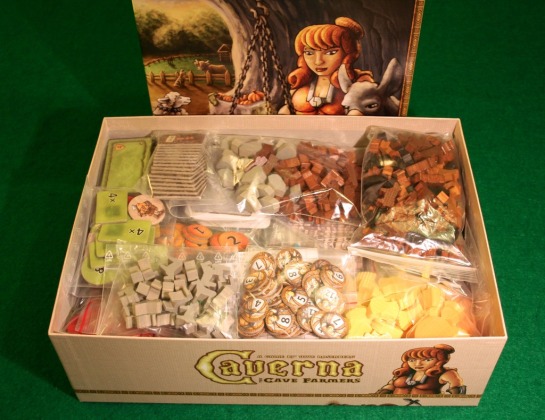 I’ve only played Caverna once, and I don’t offer this as a review of the game. In honesty, I enjoyed the experience, though I found the array of rooms I could build bewildering. It’s more an expression of confusion that anyone, particularly anyone who owns Agricola (or has access to it), should feel the need for Caverna. I can understand why some might find its changes positive, but I can’t understand why the relatively limited adjustments should be considered worth the investment Caverna requires (both financially, and in terms of the time required to adjust to its slightly altered engine).

Caverna is, ultimately, little more than Agricola slightly zoomed out: each action feels bigger, but only because the scale of the composition is different. That your farm board has more spaces doesn’t really mean you can achieve more – it means that everything on it is slightly less valuable relative to its Agricola counterpart (just as each point is less valuable, because more are available).

In a sense, Caverna offers the board game equivalent of  the reskin of the latest iOS. It provides changes hard to define as improvements, changes which seem to exist simply to expose the previous generation as old (until the launch of iOS 7, my first generation iPod Touch, which is still ticking along, was basically indiscernible from a more recent product). Of course, some will prefer Caverna to Agricola, just as some will prefer a gold iPhone to a black one. Don’t think of Agricola 2.0 as an upgrade, however. Indeed, if you have and enjoy Agricola, probably best not to think of Caverna very much at all. Why focus on the game you don’t have? After all, expanding the scale of a game doesn’t mean expanding the fun.

One thought on “On Caverna: Big isn’t Beautiful”